The Battle of Atlanta, Today › A Civil War Tour

The “intown” neighborhoods just east of downtown Atlanta are names familiar mainly to those who do or have lived there: Grant Park, Ormewood, Brownwood, Cabbagetown, Reynoldstown, Inman Park, Poncey-Highlands, Little Five Points, Candler Park, Edgewood, East Atlanta, Kirkwood, Terry Hill, Parkview. Weaving home-grown commercial districts within residential neighborhoods (whose core construction fell between the 1900s-1940s) these villages are at the heart of Atlanta’s “intown.” Most of this contiguous area experienced a radical character shift during the mid-20th-century when whites of means fled intown en masse for spread-out car-centric suburbs in adjoining counties. Though a sustained and diverse decades-long movement of restoration and renovation has, or is in the process of revitalizing most as functional desirable residential neighborhoods, they all still vary in demographic and economic character: a series of distinct villages compressed into one big bloc of space on Atlanta’s east side.

One could argue that metro-Atlanta today is more accurately represented by its widening ring of suburbs than such intown neighborhoods. As a long-time intown resident myself, I can see this in a negative and positive light: negative in that the predictable sameness of the suburbs tells little of the unique soul of this city; positive in that these intown villages remain largely havens to those who have made an effort to live in or support their revitalization. They are two separate worlds (if blending around the edges) within one large metropolitan region, a split that seems to grow more obvious and even more contentious, as recent civic battles around transportation and infrastructure initiatives can attest. It is fair to say that intown Atlanta is as foreign to most suburban Atlantans as the downtowns of other southern cities visited by the Civil War: Chattanooga, New Orleans, Nashville, Charleston. Yet despite the lifestyle gap, suburban and intown residents alike share a common trait: few know of the depth of death-and-destruction that occurred on Atlanta’s east side on the hot humid afternoon of July 22, 1864.

I was already a full-on “history geek” when I moved to Atlanta in 1993, harboring a fervent interest in the Civil War era, specifically. I had landed in the right place and by 1997 could even boast of having lived in an apartment, a loft and a duplex whose addresses resided atop what preservationists would consider core battlefield land: where significant actions related to The Battle of Atlanta had occurred. I was fast consuming the history of this particular battle, on-paper; but being set within the real-time infrastructure and neighborhoods of a modern city posed a daunting challenge when pursuing the battle’s history ‘in the fields.’ This is no Shiloh, Antietam, or Chickamauga. You will not find the deference of town to battlefield as found at Gettysburg; nor will you find the urban reservations that interpret the battles for Chattanooga, and the campaigns / battles around Richmond. There are no preserved fields, no parks, no pull-offs maintained to interpret a battle equal in size—and of greater significance—than other western-theatre battles (such as Pea Ridge, Stones River, Kennesaw Mountain) whose fields and history have been incorporated into the National Park Service. Outside of two monuments and an array of informative, yet often difficult to access state historical markers—located as they are alongside Atlanta’s unforgiving roadway system—the casual passer-by would have no idea that the east side of Atlanta was so historically relevant … “How best to tell this story?” was the question I posed to myself. My answer: “from within the context of the modern city.”

Over the years, I had stopped-to-read dozens of the mentioned state historical markers. Superbly done (if a bit dated), these signs are nonetheless often hard to access: positioned along main thoroughfares, at intersections, on busy shoulders. I often felt I was taking my life into my own hands to get out there and read them. In addition, many markers are down side-roads and easy to miss, this in part due to a final difficulty: the modern maze of roadways in no way reflects the historical flow of events on July 22, 1864, easily making a confused jumble of things. But in 1997, an idea struck that tied it all together: record the physical location of each state historical marker related to the battle on a modern roadmap. With this modern map as a reference I was able to overlay historical maps and determine—with precision—how the battle flowed, and where significant events occurred, in relation to Atlanta — today.

The Battle of Atlanta set against the transportation-centric modern city that grew steadily across the 20th century only to explode by century’s end into a full-on metropolis, is an organic history that has been sporadically documented. Since our first full-length tour of the “battlefield”—July 22, 2004—this ongoing InHeritage documentary has set out to correct that.

NEXT: Part I › Hardee’s Night March 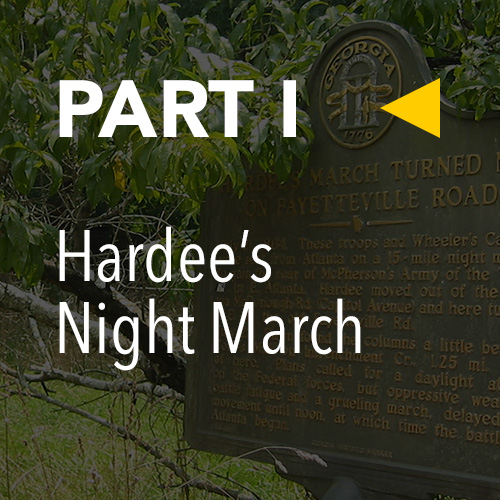 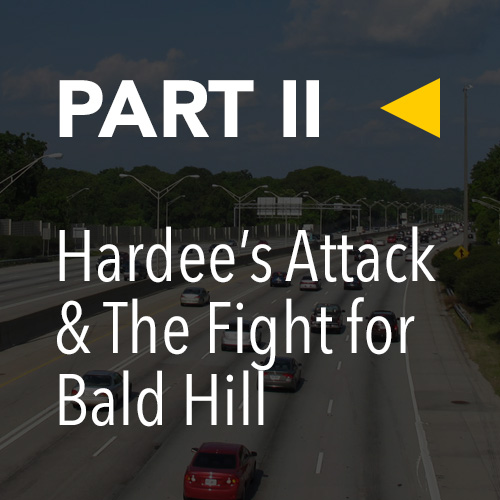 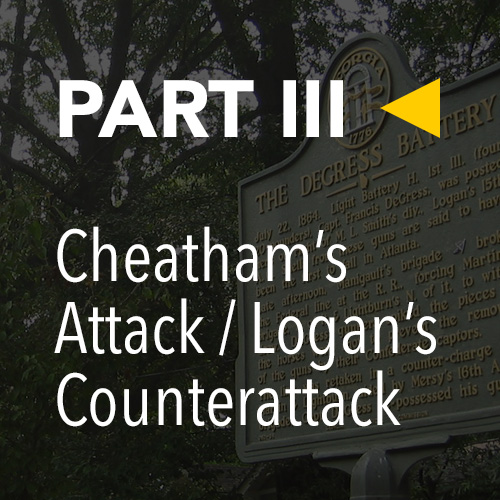 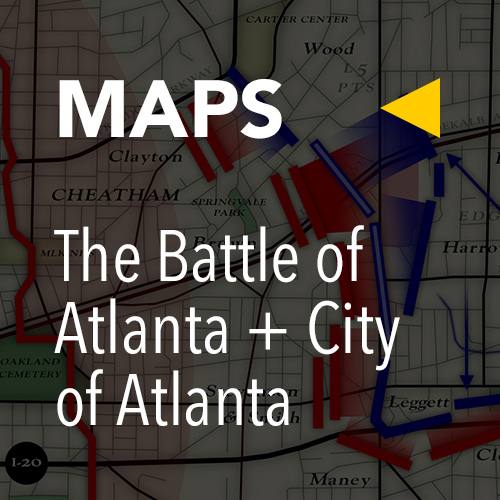