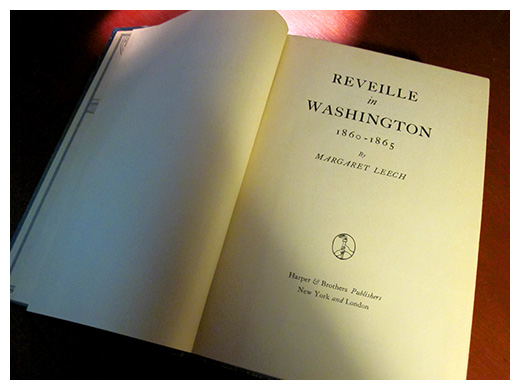 I have an entire shelf overflowing with Civil War histories. Almost all are devoted to specific battles and campaigns, specific armies, subjects, or central figures. Most deal tangentially with Washington, D.C., during the war—and most of this is in reference to Lincoln. Digested in parts over time, these descriptions had—I felt—provided me a decent understanding of the city, its character, its day-to-day existence from 1861-1865. But then, through an InHeritage documentary project, I was introduced to “Reveille in Washington” by Margaret Leech. I quickly realized my understanding was anecdotal, not linear or anything near complete. Like most Civil War buffs, my historical perspective was from out-in-the-fields looking back at D.C. Leech flips this view entirely. You view the era through the lens of Washingtonians, a city on the border of North & South (some would argue more South, than North) with strong camps supporting either side. Leech’s storytelling narrative provides the reader a view from the inside looking out. It is a ‘looking at something you have seen a thousand times, in a new light’ moment.

I must also drop kudos to Leech who, though a member of the distinguished post WWI literary club, The Algonquin Roundtable, researched, wrote and published this solid work of history during an era when history depts. and publishing in general seemed like an all-male fraternity. As if that gender-busting achievement was not enough, this book won a Pulitzer in 1942. It is a rare blend of literary-readability wrapped around groundbreaking research. And though time and discovery have given us a much broader understanding of not just the facts but their long-term impact since this book was published, it stands the test-of-time. In part, this is due to Leech recognizing the emerging current of that era, which sought to tell the truth about the war: that it was no simple political argument over rights & honor, but a comprehensive reinterpretation on how America would move, as a nation, into the future. Published during another cataclysmic war, this story shows Washington as the central city in the war itself. Everything was on a pivot around it. And like the war itself, Leech shows the transformation of D.C. in parallel with the soldiers who fought and the civilians that supported the effort: from the green, exuberant and nervous, to the hardened, fatalistic, yet resolved. With that in mind, here are a few great quotes from the hundreds marked ‘in the margins’: