“Dancing in the Dark” › Morris Dickstein 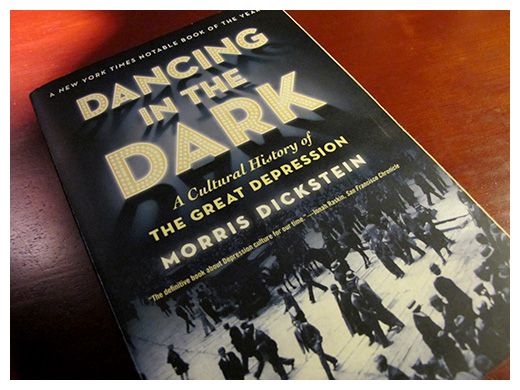 Common enough is the volume found to be exhaustively-researched while maintaining stylistic rhythm: a narrative born of an author’s grinding resolve to deliver lasting work. But rare is the volume that also radiates with a sense that the author enjoyed writing it as much as you did reading it. The bright pace of Morris Dickstein’s “Dancing in the Dark” makes clear that he drank in every ounce of researching and writing this book. Fusing history and the arts, Dickstein slaloms through a wide range of disciplines and results in literature, verse, documentary-work, design, movies, theatre, music, and the various hybrids: musicals, dance, etc., that gushed from an era at once teeming with creative expression and the bone-deep chill of a society on the brink: 1929-1941, The Great Depression.

The book rolls out as an extended review, Dickstein himself an accomplished arts critic. Its historical and narrative accomplishments were so strong as to inspire beyond the book itself, several glowing reviews (which led me to the book) standing out as great pieces of aesthetic narrative in their own right. It seemed as if nothing short of inspired writing was acceptable in critiquing a work delivering at so high a level. In the end, it is this high-dose infusion of love for the subjects that elevates the book. It should be noted that Dickstein sticks only to those works / personalities from the era that have personal impact. But there is no rule that an author spending so much time with a specific subject can’t pick-and-choose, the end goal to enjoy the hell out of the process—the journey itself. And we should be glad for it; when employed as strategically as in Morris Dickstein’s “Dancing in the Dark,” from author to readers, everybody wins … Here’s a cross-cut of passages marked in the margins of my, now, worn copy: