Notes to Future Self › “Zen & the Art of Motorcycle Maintenance” 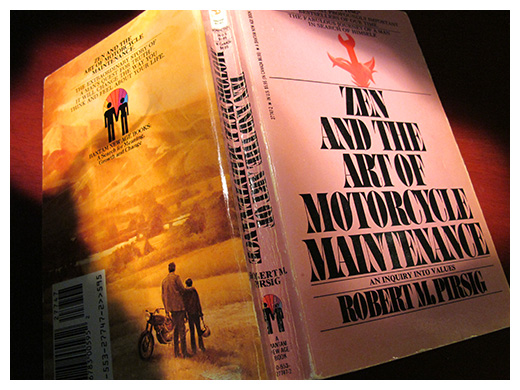 Over half of my life ago someone (forget who) recommended I read Robert Pirsig’s Zen & the Art of Motorcycle Maintenance. At the ripe old age of 20, I was only beginning to realize what the mash-up of ancestry, biology and environment had in store for me. It was a renaissance-style whirlwind of an era, everything I’d heard to that point about what I needed to do, how I needed to act and think, what was “successful”—all of that was in-question, if not out-the-window. I was an “uncarved block.” The tension of those college years lay in the pull between an instinctual moderation (my early environmental training) and radical experimentation. The gaping universe between the two lay before my windshield. It was more an intellectual / spiritual tsunami than awakening, the sheer volume of previously unknown info and the unconsidered diversity-of-views screaming by the windows with alarming exhilarating speed. It was an automatic improvisational sprint. And I had no idea what it all meant and where it was all headed …

It was at that point that Zen & the Art of Motorcycle Maintenance fell into my anxious trembling hands. I vacuumed it up. But in an infant step towards wise-maturity, realized that I did not fully understand all the passages on pages I had dog-eared, the quotes highlighted. It was as if I was saving them for a future date: “notes to future self” … Well, 2010 proved to be that future date, having re-read the book at the ripe young age of 40. Here are some resonant quotes from Zen & the Art of Motorcycle Maintenance that I marked in 1990, prior to the journey, to be fully appreciated in 2010—in the midst of a journey long underway: