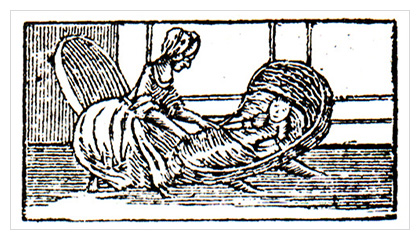 Nursery rhymes have been with us ever since there were babies to lull and older children to entertain. As folk literature, they often mask religious, political and sexual meanings. For instance, it has been theorized that the bags of wool given in Bah, Bah, Black Sheep represent monies paid to kings and churches. There are also those who say Jack and Jill were going up the hill for more than just water.

Most verses with which we are familiar come from Britain. Americans call them "Mother Goose rhymes" while the British are more apt to call them simply "melodies," "songs" or "jingles." This, and the fact that a real-life Mrs. Goose lived in Boston as early as 1692, has convinced some that the beloved character is actually American. But irrefutable proof of Mother Goose as a teller of children’s tales can be traced back at least to the year 1650, where she is mentioned by that name in a French volume called La Muse Historique. Its author was probably making a reference to "Goose Footed Bertha," the legendary French storyteller who spun yarns, literally, as she worked incessantly at a spinning wheel. Her foot had been flattened by years at the treadle. The origins of a Goose Footed Bertha go as far back as 783. Bertha, the mother of King Charlemagne and a patroness of children, was known as Queen Goose Foot because of a malformation. So certainly the character of Mother Goose is an Old World invention. She migrated to America on European ships and adapted herself to the religious, political and sexual climate of a new land.

Explorers of the ‘New World’ found an established native culture. Supposedly, a pilgrim from the Mayflower saw Indian mothers rocking their babies in cradles slung from trees, and was inspired to write this rhyme:

The women of the Mayflower came ashore on Monday, November 13, 1620 (two days after the men). The first thing they did was wash clothing made filthy from sixty-eight days at sea. This established an orderly ritual reflected by the following rhyme:

Wash on Monday,
Iron on Tuesday,
Bake on Wednesday,
Brew on Thursday,
Churn on Friday,
Mend on Saturday,
Go to meeting on Sunday.

On April 5, 1665, Elizabeth Foster was born in the coastal settlement of Charleston. At age 27, she married Isaac Goose of Boston and became stepmother to ten children. She herself bore six more. One daughter wed a man named Thomas Fleet and gave Elizabeth Goose seven grandchildren. She lulled them with songs remembered from her Charleston childhood. Thomas Fleet allegedly published these lullabies in 1719 under the title: Songs for the Nursery, or Mother Goose’s Melodies. No known copy of this book exists, and it is a mystery whether it was ever printed at all. Thomas Fleet did publish a New-England Primer in 1737, but this work made no mention of any "Mother Goose" rhymes.

Elizabeth Goose died in late 1756 or early 1757, and was reputedly put to rest in Boston’s Old Granary Burying Ground. Many still believe she was the true "Mother Goose," and a tombstone there attracts visitors from all over the world. The name on the stone is Mary, and it is probably for Isaac Goose’s previous wife, but this does not dissuade the faithful.

The passing of Elizabeth Goose aside, the spirit of the folk rhyme survived, and went on to rally the fight for American independence. A refrain still echoing from that time is:

Yankee Doodle went to town,
Riding on a pony.
Stuck a feather in his hat,
And called it macaroni.

"Macaroni" does not refer to pasta, but to something frivolous worn by a fop, or a dandy. In fact, the term "Yankee Doodle Dandy" was originally derisive. The popular theory is that Dr. Richard Shuckburgh, an English surgeon and wit, coined it in 1775 to deride the fantastically uniformed Colonial troops. "Doodle" is said to have meant a dim-witted but happy fellow, and "Yankee" was a word that referred to New-Englanders. It is of unclear origin, but a British officer in General Burgoyne’s Revolutionary War army wrote: "It is derived from a Cherokee word, ‘eankke,’ which signifies coward and slave. This epithet, ‘Yankee,’ was bestowed upon the residents of New England by Virginians for not assisting them with the war with the Cherokees."

British soldiers sang "Yankee Doodle" tunes to poke fun at upstart Colonists. When the tide of the war began to turn, however, American troops took up the jingle as their own, and the singing of it became a rousing cry that soon made the British regret ever creating it. Several variations exist, but to Americans the classic full version will always be: 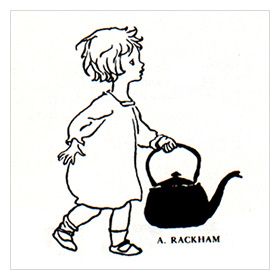 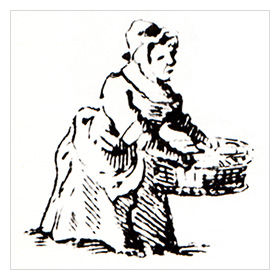 In 1786, ten years after the Revolutionary War, a Massachusetts bookseller named Isaiah Thomas reprinted a book of nursery rhymes originally sold in England. London publisher John Newbery had released Mother Goose’s Melody: or Sonnets for the Cradle sometime between 1760 and 1766. That Thomas chose to reprint the collection is notable—his wife was a granddaughter of the Fleets, and thus the great granddaughter of Elizabeth Goose.

Most nursery rhymes known in America have their origins in England. But some were changed by their long journey over the Atlantic. On rainy days, English children chant:

It’s raining, it’s raining,
There’s pepper in the box,
And all the little ladies
Are holding up their frocks.

While in America the words are something more like:

It’s raining, it’s pouring,
The old man is snoring;
He got into bed
And bumped his head
And couldn’t get up in the morning.

"Counting out" rhymes are used to select the participants for certain kinds of games. In England, one child will point at the others in turn and say:

One, two, three, four, five, six, seven.
All good children go to heaven,
Penny on the water,
Two pence on the sea,
Three pence on the railway,
Out goes she.

An American version of the same is:

One, two, three, four, five, six, seven.
All good children go to heaven,
Some fly east,
Some fly west,
Some fly over the cuckoo’s nest.

This "counting out" rhyme was printed in 1814 by Jesse Cochran of Windsor, Vermont:

Many traditional folk rhymes are based on holidays. America’s own "Groundhog’s Day" shadow myth derives from much earlier beliefs about the second of February. By some religious traditions, this is the day the altar candles are blessed:

If Candlemas Day be fair and bright,
Winter will have another flight;
But if it be dark with clouds and rain,
Winter is gone, and will not come again.

The July 4th Independence Day is a uniquely American celebration. It is honored in this country proverb, used by farmers to see if they have raised a good corn crop:

Knee high
By the Fourth of July

Arguably the most famous nursery rhyme attributed to an American was written by Sarah Josepha Hale of Boston early in the year 1830:

Mary had a little lamb,
Its fleece was white as snow;
And everywhere that Mary went
The lamb was sure to go.
It followed her to school one day,
That was against the rule;
It made the children laugh and play,
To see a lamb in school.
And so the teacher turned it out,
But still it lingered near,
And waited patiently about
Till Mary did appear.
Why does the lamb love Mary so?
The eager children cry;
Why, Mary loves the lamb, you know,
The teacher did reply.

In the second half of the nineteenth century, the publishing houses of Boston, New York and Philadelphia responded to a sudden national nostalgia for Mother Goose rhymes with cheaply produced volumes of traditional verse. Books were printed on linen for the first time. These "paper-backs" sold well, and were perfect for children, who could read them over and over again without the fear of ruining an expensive literary investment.

And Americans continued to add their own original verses. In 1864, Songwriter Septimus Winter penned this whimsical rhyme for publication:

Mr. Winter also wrote this now controversial piece for the minstrel shows of the 1860s:

This was a case of reverse influence, as both English lyricist Frank Green and English mystery writer Agatha Christie were inspired by Winter’s American "Injun" ditty.

When Benjamin Franklin first included a version of the next rhyme in his Poor Richard’s Almanack, America and England were on opposite sides of a struggle and an ocean:

During World War II, this verse was framed and hung on the wall of the Anglo-American Supply Headquarters in London, England. The allied forces, in effect, saved the kingdom by heeding the warning inherent to the rhyme. Production lines ran non-stop to make sure the shoe was never without a nail, the horse never without a shoe, the rider never without a horse, and the battle never without a rider. Translated to ammunition, tanks, and troops, this made for a war-winning effort.

Mother Goose may have come from Europe on the Mayflower, but in this instance she was carried back again on a "Liberty" supply ship.

No, no, my melodies will never die,
While nurses sing and babies cry.