Synchrony & The Ensign Troughs (With a side of Robert Frost)

I like to walk. So most every day I trot off from our Atlanta-area home and go a few miles around the extended neighborhood. On a recent end of July day it was a little harder to get motivated as it was pushing 100 degrees and I was without my trusty iPod. When I have music to serenade me, I can tolerate most any inclement condition, but on this day all I had were my random thoughts to distract from the suffocating heat. And I suppose thoughts do not get any more random than what I’d read on a pencil a few hours before and the zodiac sign Leo. The pencil was on the bathroom counter when I got up, a souvenir embossed with the name of the Robert Frost farm in Derry, NH, which we had visited for the first time in 2006 … Robert Frost Farm State Historic Site

So the great poet was on my mind. Being a believer in synchrony (a term, btw, preferable to “synchronicity”, which spell check will invariably underline — try it!) I wondered if Frost’s birthday was near, as he seems very Leonine to me. So when I got home I did a search for his birth date. No, he was not born in July or August, but on March 26, 1874. He was an Aries. And he’d died in January of 1963.

Still, the musing from my sweat-soaked walk that there was something to be gleaned from associating Frost and Leo lingered. Was it that he was known as a “Lion of Poetry”? I typed “Lion” next to his name in the search engine. Under an IMAGES link, I saw a photograph of a lion-headed fountain that intrigued me. I was directed to the website: Elaine Franz Witten / The-Village-Lion 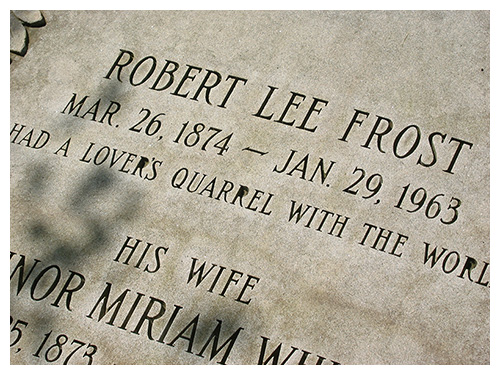 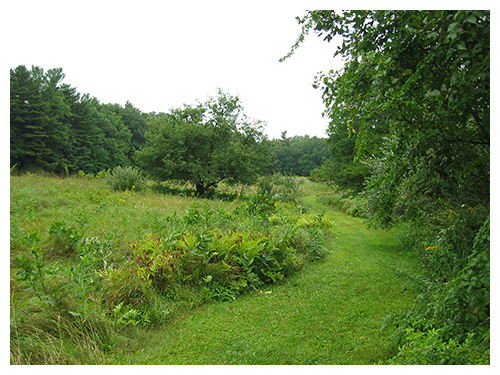 Here was the story of an artist’s refurbishment of a fountain in Bennington, Vermont. Bennington being the Frost connection as it is where he is lain to rest. A resting place my husband and I had visited on two occasions before.

It was at this juncture that ol’ Robert (who was never referred to as the Lion of anything as far as I know) dropped away entirely and I was led, funnily, to a place for horses to drink water. Sculptor Elaine Franz Witten was commissioned to recreate the lion heads which had adorned a Progressive Era fountain specifically designed as a watering trough for animals. The upper bowl was for horses and mules, and the watering holes at the base for dogs and cats. It was given as a gift to Bennington Village in 1906 by the National Humane Alliance, an organization founded by Hermon Lee Ensign. Witten provides an excellent link to more information: A Watering Trough For Horses

Ensign invented a printing device and made a fortune. With it, he funded his passion for the welfare of animals, following the groundbreaking lead of the previously established ASPCA. After he passed away in 1899, the Humane Alliance under the direction of President Harrison Grey Fiske, a New York City journalist and theatrical manager, made Ensign’s dream of addressing animal welfare a reality. Beginning in 1906, the Alliance started donating animal watering fountains to cities all across the United States and even Mexico and Puerto Rico. Harrison’s wife, Minnie Maddern Fiske, was not only one of the leading actresses in the day, but also a prominent animal welfare advocate. Proceeds from her performances went toward making and distributing the troughs.

The ensign trough nearest to us went to Augusta, Georgia, and was the subject of an August 16, 2009, article by journalist Bill Kirby (written for the Augusta Chronicle, now offline).

Now, as if it weren’t enough that a random internet search had led me to a subject that connected history and animal awareness—two things near to my heart—and Georgia to one of my very favorite towns in Vermont, there was one more neat fact. The fountains had been quarried and manufactured on Maine’s Vinalhaven Island. This is the very place Dave and I were vacationing in 1999 when we decided to launch a venture called InHeritage. In fact, its eleventh birthday is coming up on August 14th. Whaddaya know—a Leo!