"Origins of the New South" is a classic of narrative history. Groundbreaking for its booster-free honesty (an irony in its own right, considering the boosterism typical of New South proponents), Woodward’s volume continues to achieve that most rare feat of historical works: standing the test of time. It is still a relevant work over sixty years since its publication, a dedication to forward-thinking in research that is to be celebrated … 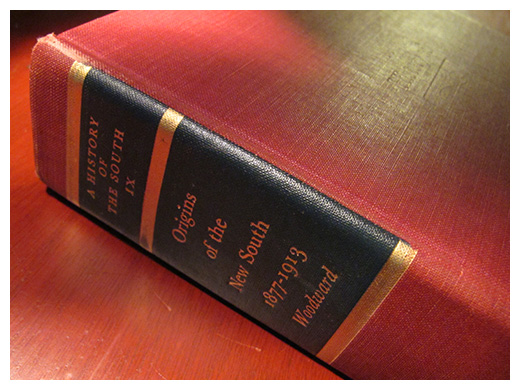 PART 1: It is the rare individual that can blend scholar-level documentation with a creative writer’s touch. In the 20th century, few did it as well as C. Vann Woodward; and amongst 20th century historical works, few balance the two better than: “Origins of the New South.”

There are few tasks more daunting for a historian than to confront entrenched tradition and, or myth having been elevated to ‘popular fact’ through repetition and faith. But historians devoted to their craft—not a preconceived agenda—pursue the confrontation as their own article of faith, simply because the facts tell a different story. Written and published at a time when ‘Jim Crow’ was still law across the South (though cracks were showing), Woodward performs this feat with soft-spoken authoritative muscle in “Origins.” Volume IX of the epic 10-volume “History of the South” set (commissioned and accomplished in the post-war years, and tracing Southern history from Jamestowne to WWII), Woodward’s deft skill for deflating romanticism, unquestioned faiths and traditional mores are impressive; the more so in that there is no finger-wagging, just incisive matter-of-fact narrative. It is a volume all the more fascinating to me, personally, being a transplanted Yank living in the South—which upon entry, can seem a foreign land to Americans from other regions. Woodward snaps together the foundation of this modern South, using his timeline to define a root regional character that hints the fitful, yet undeniable progressive steps of the 20th century South (in the radical collectives of rural Populism, the proto-steps towards full civil rights for all citizens and the courage of creative writers) and how these moves were tempered—often squelched—by an instinctual conservatism and manufactured deference to ‘established’ institutions, both political and economic (the ‘Redemption’ period during which white Southerners took back local control from Reconstruction policies, often violently, and re-established a rigid caste system that deferred to white & wealth supremacy in all matters). Add to this, the engine that fueled the whole era: the marketing of “progress,” the public relations campaign that would become synonymous with ‘The New South’—even if the immediate realities of agricultural poverty, institutional indebtedness, the complete fusion of business w/government, and a violent racism told otherwise. This story Woodward tells as if full disclosure, published at a time when leaders of that region didn’t want to, or expect to hear it.

Here’s the first of four groups of quotes marked in the margins (of my paperback version), quintessential explanations of this turbulent period following Reconstruction, when social reform was replaced by a devotion to economic expansion that cared little for the civil rights of newly freed African Americans, or the financial well-being of rural whites. It would—slowly, eventually—gin up home-grown protest movements and real social/economic progress throughout the South:

PART 2: Part 2 of our highlight of "Origins" focuses on the hard decline of the small independent farmer across the South during the 1870s-1890s. This reality would light the fuse for a key era covered authoritatively by Woodward: the rise and fall of the Farmer’s Alliance / Southern Populist movement. Many factors fell together to create the worsening conditions: hard-edged boom-bust economic cycles, the rise of large agricultural combinations and the local ‘furnishing merchant’ (which led directly to less independent ownership and more sharecropping), bank and transportation monopolies controlling the terms of credit and the transfer of product-to-market, the focus on single-crop (cotton) farming, and for African American farmers: Redemption-era racism. But the same economic dynamics that re-established white-dominant rule also widened the boundaries of virtual agrarian servitude. No longer confined to black communities, inescapable debt began to ensnare white farmers in this society-wide realignment of wealth and class. Though cultural, political, economic mores were drawn clearly—and often enforced violently—societal deference to those of means and power was superseded by the desperation of farmers, still the vast majority of the Southern population. As with the “progress” boasted of by New South civic leaders, the idea of the “Solid South” was also more public-relations than real. ‘The Populist Revolt’ proved both boasts to be baseless … Here’s a brief synopsis of the roots of this chapter of Southern history, in Woodward’s words:

PART 3: In this third-set of quotes from Woodward’s classic New South treatise, we take a look at the troubled era that runs up to the turn-of-the-twentieth-century. The previously highlighted Populist/agrarian revolt was diffused as a major threat to the established New South power structure in the late 1890s through the combination of an improving economy, “fusion” of some Populists w/Southern Democrats on a plank promising the wide coinage of silver (and thereby a wider circulation of money), and the more raw strategies of voter intimidation and electoral fraud. This period saw an iron-clad tightening of the recently challenged power structure—a ‘Solid South’ created on raw power alone—and with it the limiting of economic and individual freedoms. The single most damaging facet was the rapid implementation of ‘Jim Crow,’ which institutionalized second-class status for all African Americans across the South. Add to this the external pressures of monopolistic tendencies controlling the major national industries and development of natural resources, and the ‘New South promise’ seems down to its final flickering spark—the South itself devolving into second-class status. Woodward’s lyrical summaries of the era:

PART 4: Here’s a final group of ‘margin-marked’ quotes from our highlight of C. Vann Woodward’s landmark: “Origins of the New South.” In these, Woodward guides us through the first decade of the twentieth century: an era when political machines built to enforce white supremacy and economic monopoly reigned throughout the South—and this at a time when social / economic reform had begun to drive the national debate. But the self-imposed insularity of the South proved steadfast, at once fundamentalist and staunchly conservative. ‘Home-rule’ and the romantic notion of “the lost cause” were blended into a faith as unquestionable as the inhumane second-class status of black Southerners (a reality that would push many to leave, joining ‘The Great Migration’ of poor African Americans bound for northern industrial cities). The South settled in as almost a colonial section to the rest of the country. It went its own way and America, largely, let it do so. Still, the brave proto-steps towards modernization and civil justice—though faint and under threat of violent suppression—were already visible. Insularity and social-stasis would inevitably prove untenable. Again, Woodward’s summations: